Jade plants, or Crassula ovata, are a type of succulent, meaning they make for hardy, easy-care decorative houseplants. They are sometimes also nicknamed 'Lucky Plants' or 'Money Plants', as in some places it is believed that they can help encourage good fortune with your finances! This also makes them a popular gift. 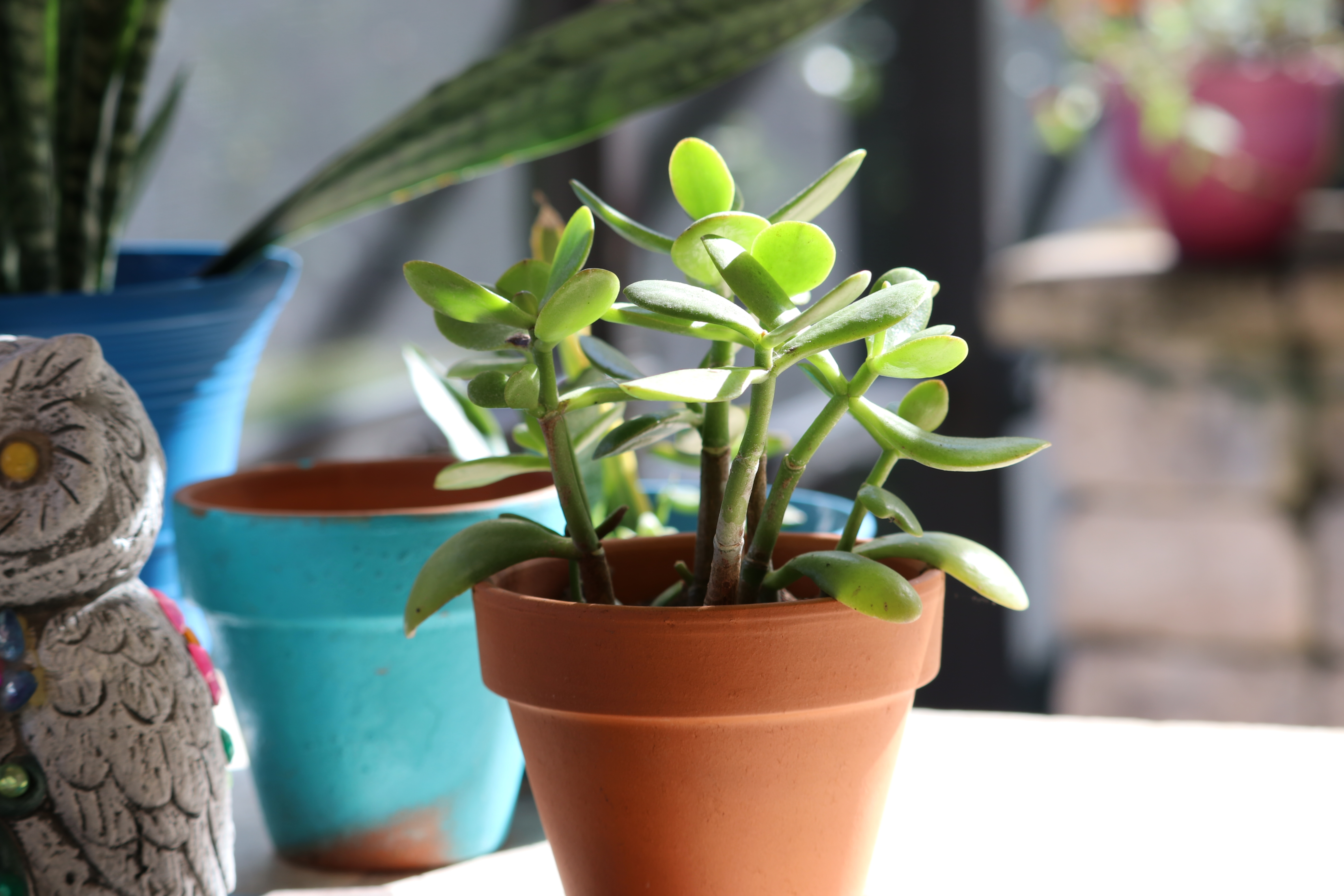 The Jade plant is originally from South Africa, and is part of the Genus Crassula, which includes a large number of striking plants with uniquely shaped and colored leaves. The 'Jade' name comes from the rich green coloring of the leaves, which is reminiscent of jade gemstones. 'Crassula' means thick, as members of this Genus tend to have fleshy leaves. In the case of Jade plants, their branches are also very thick and quite woody - almost like a little tree!

Because these branches, as well as the leaves themselves, can become quite heavy as your Jade plant grows, it's a good idea to plant it in a clay / terracotta pot so that it won't become unbalanced and tip over.

These plants have become very popular over time, and spread far from their native lands. They're first described in England as long ago as 1768, and have been used as houseplants across Europe and America for over 100 years. Their roots and leaves have historically been used by various African tribes, as a food source as well as medicinally. We don't recommend that you try this yourself though! It's also important to bear in mind that Jade plants are toxic to pets, so keep them out of reach of any animals you may have in your home. 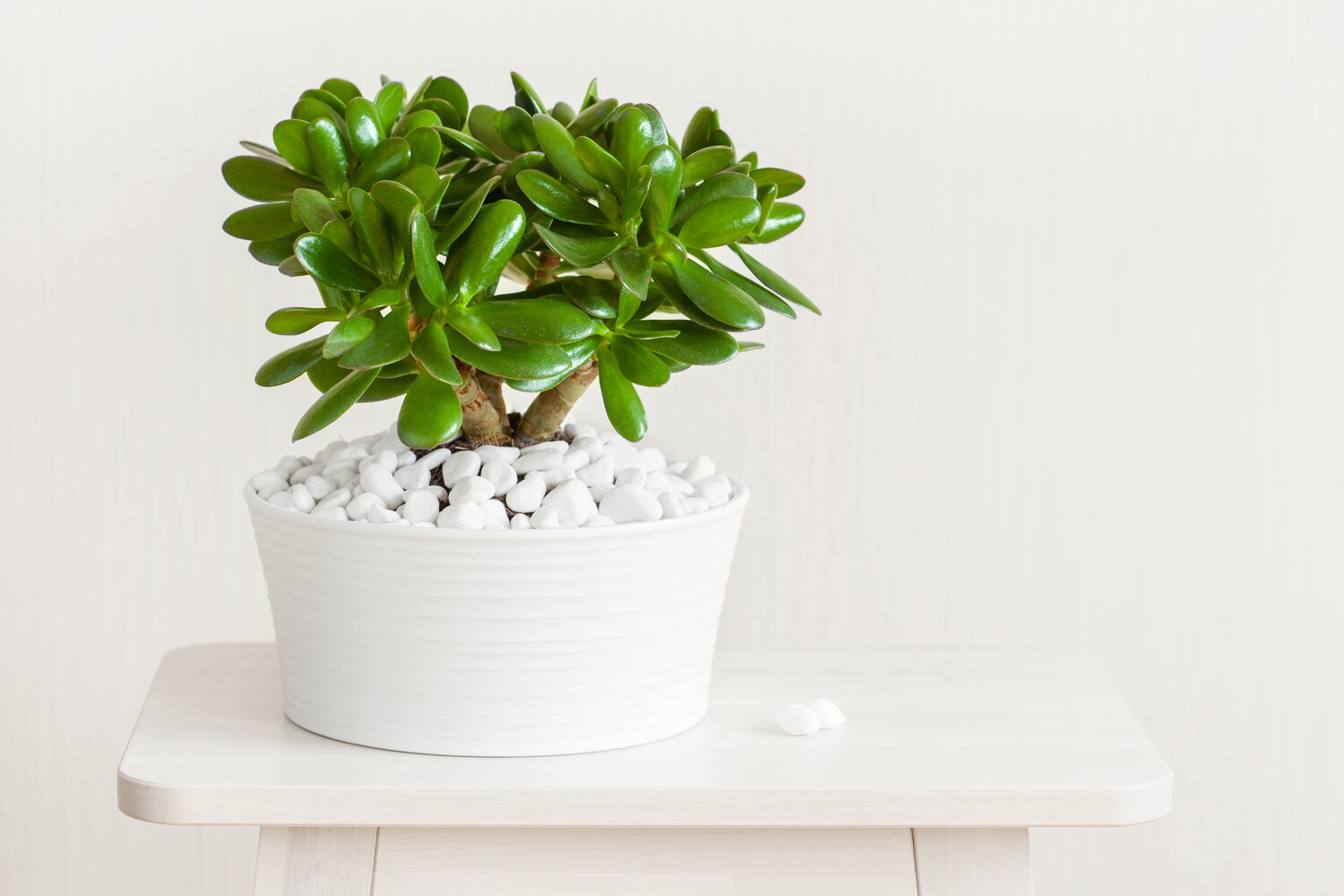 Jade plants are often regarded as an easy-care plant, and with a little time and patience can become impressively large and beautiful additions to your plant collection. They grow slowly, around 2 inches (circa 5 cm) per year, but can eventually reach heights of up to 6 feet tall (1.8 meters). They can also live for a very long time, so it's worth sticking with it.

They typically do well in home environments, as they're tolerant of warm and dry conditions. Like other succulents, they can survive on little water, and it's much more damaging to overwater a Jade plant than to underwater it, so if you're ever unsure then it's better to hold off.

One important thing to note is that Jade plants are very cold-sensitive. If you like to keep yours outdoors, make sure to bring it inside once the temperatures start to get colder, as they may not survive temperatures below around 40 °F, or 4°C . In fact, at Planta, we usually only recommend keeping them outdoors in the summer months, between June and August.

Jade plants can produce pretty pink-white flowers. If you want to try and encourage yours to flower, you should hold off on watering during late winter / the beginnings of spring and ensure that your plant gets total darkness at night time.

Note that these flowers will attract a number of insects, including butterflies and bees, but also wasps. In fact, wasps have been known to build their nests on their stems, so this is maybe something to be aware of if you plan to keep your Jade plant outdoors!

Plants within the Crassula genus apply Crassulacean Acid Metabolism, or CAM photosynthesis, meaning they can absorb and store carbon dioxide even when it is dark (perfect for bedrooms).

However, Crassulas unique ability to store carbon dioxide as organic crassulacean acids mean that their stomata can stay closed during the day and instead open at night. As such, significantly less water is lost via the leaves during photosynthesis. The stored carbon dioxide can also be recycled if there is a significant period of drought, meaning that the stomata won't have to open at all during this time.